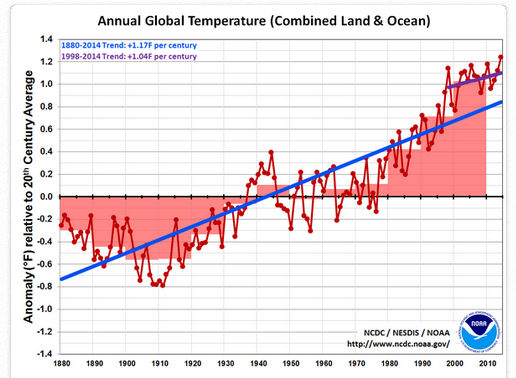 So, let me get this straight. The standard AGW narrative is that man made CO2 emissions are causing the temperature to rise – so since the temperature increases in those two periods are nearly identical, it would then follow that the amount of CO2 emitted in those periods (or in trailing period prior to it) are equal? That is, the amount of CO2 emitted from cars and coal plants from 1910 – 1940 is exactly equal to the amounted emitted from 1970-2000? Really? Doesn’t that strike anyone as odd? I think there were a lot more cars and coal plants in 1985 then there were in 1925 (midpoint of each period). I’d say it’s pretty darn amazing that the rate in increase in temperature hasn’t changed given the substantially greater output of carbon in more recent years.

Or could it be that natural variability is simply overwhelming the influence of manmade CO2 emissions? The fact that the rate has not increased and is actually apparently slightly decreasing could even suggest CO2 emissions are having a slight suppressive effect on global temperature, that is, absent such emissions the rate of increase in temperature would be greater than it is today.