Following up to last week’s post (read here). Although the constant cycle of supply and demand tends to make it unclear which process came first, in the end we can trace the inception point to supply. Supply that can be used to satisfy demand comes about through savings and so it is savings that ultimately is the source of jobs (employees are paid prior to sales). So, since the popular media tells us that corporate profits and cash on hand have never been higher, why is job growth so anemic?

There is actually a great deal of job creation (see chart), even at the height of the recession there were millions of jobs being created. Unfortunately, more were being destroyed. However, it is misleading to suggest there are few jobs being created. Further investigation of the chart reveals that  job growth rates have been trending downward for the last 12 years (no BLS data for this statistic exists prior to 1992). Why would this be? 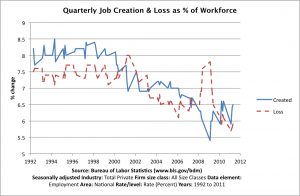 1) Regulation: regulation hinders jobs in three ways: (a) it acts as a stealth tax by increasing dead-weight costs (for example, a report last year by the House Government Oversight and Reform Committee stated the Obama administration has established nearly 300 new regulations that will cost businesses an additional $60 billion each year), (b) it acts as a barrier to new firms that would otherwise compete with established firms either by criminalizing innovative ideas or imposing paperwork compliance costs that are disproportionately burdensome to smaller business and (c) in some cases it simply outlaws entirely certain types of business (see the Lacey Act as one example). To illustrate point B consider the following: where would Apple be today if Microsoft had encouraged regulations that required competitors to conform to their standards. It would be illegal for Apple to innovate and thus deviate from those “standards”… and we’d all be running Windows 95 while listening to our Zunes and the iPad would be mere fanciful sci-fi fodder. Because the computer industry is relatively unregulated, there has been tremendous innovation and growth. But in other heavily regulated sectors (health insurance, agriculture, automotive, etc.) there is little to no innovation because bureaucratic micromanagement simply does not allow it. Without innovation there is no growth and without growth there is no reason to have a new job.

2) Risk: Many of those in government condescendingly dismiss the idea that risk arising from unknown tax costs contributes to slow job growth. Their condescension is rooted in ignorance of the real world, a world where risk is a constant companion. But in the government’s ivory tower that companion is nowhere to be found. Their obliviousness to risk is apparent in the squandering of other people’s money on “good ideas” that ultimately fail and for which they have zero accountability. Although taxes were higher in the 1990’s, at least they were stable. Tax rates that vary year to year on the whim of Congress are more destructive than high taxes as people focus their energy on gaming the tax system rather than in pursuing productive goals.  Think of it like this: what if the final price for a car you bought today would not be revealed to you until 5 years from now. You would start your monthly payments now and at the end of 5 years you’ll either have it paid off or owe a whole lot more. How likely are you going to buy a car with that level of cost risk? Likewise, those with money to invest in new jobs also will wait until they can be certain of the final costs. Risk makes people cautious… unstable tax policies that increase financial risk will increase cautiousness.

3) Training: the stock bubble destroyed financial capital, however the housing bubble destroyed financial & human capital. Financial capital destruction can be swept under the inflationary rug through Federal Reserve printing press slight of hand, however there is no keystroke subterfuge that can wipe away the years people spent training and gaining experience in construction and related industries. In short, human capital was misallocated into the wrong sectors of the economy. The government operated a national multi-year housing circus financed with artificially suppressed interest rates and the implied moral hazard of “too big to fail”. People were attracted to that monetary opportunity like flies to honey. But then overnight the government flipped the switch and the circus went dark. Now the circus participants must spend years retraining. Training takes time.

Ultimately the market can heal itself if the price mechanism is left to operate free of government manipulation or interference (the mechanism whereby wages for high demand jobs will rise and thus attract people to train for those sectors). Propping up burst economic sectors or inflating new ones will only postpone the fever that ultimately is needed to cure the economy and restore healthy job growth.