Appeared in March 17, 2011 Morgan County Citizen as a paid advertisement (due to length)

Follow @gregtmorin
At first I thought Gregg Wagner’s March 10 editorial was meant to be satirical… until I got to the end and saw he is a  “member of the Democratic Party”. Really? I would’ve guessed the Communist Party with phrases like “government could limit [what] drug companies charge” or “the government [should] regulate the money paid to physicians and dentists for their services” or his laundry list of goodies the government should provide, e.g. long-term care insurance and dental insurance. I guess he’s not aware of the lessons from failed socialist and communist systems, namely that when the government dictates price, supply goes down and waiting lines get longer. As the 2005 decision by the Canadian Supreme Court* underscored “Access to a waiting list is not access to health care”. What incentive do producers (those in the medical community) have to provide their services when the government dictates a price point so low it is not even worth their time. Oh, right… healthcare is a “right”. Funny, I wonder how government will provide Americans with this “right” when all the physicians and drug companies have gone overseas. Maybe they’ll institute a “doctor draft”?

Our health care system is a mess precisely because we do not have a free market in health care or health insurance. Government has distorted the market on so many levels it’s not even funny. Medicare/Medicaid account for **nearly 60% of all healthcare spending in this country. They dictate below market prices and the difference of which is passed on to the other 40% of payers. “Certificate of Need” laws prevent new hospitals from opening thereby limiting the growth of medical services. Needless insurance laws restrict carriers from operating across state lines. Employer provided health insurance has been incentivized by the IRS since*** 1946, removing any incentive the consumer might have had to control their health care spending. Inflation for the last 65 years has been approx. ****5% whereas health care costs have gone up faster. Even if we conservatively assume only 5% above inflation or a total of 10% per year we see that a $10 procedure in 1946 today would cost $210 if it kept pace with inflation but rather instead costs $4,050. It’s just simple math. For the first 40 years the increases were annoying but manageable, but we are now in the asymptotic increase phase of compounding (see chart) where even if rates of increase could be lowered the increases would still be large in absolute terms. That’s why it is now a “crisis” – we’re in the “hockey stick” phase with no end in site. 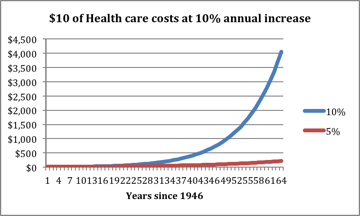 Yes, it’s a mess. So what’s the answer? It is simple but politically unfeasible currently.

What would this accomplish? Insurers could once again offer low cost high deductible catastrophic plans that didn’t include ridiculous things one does not want or need. Insurers could compete across state lines. Low deductible plans would get even more expensive – but this is a good thing! It means more people will take responsibility for their own health care costs which will provide the incentive to drive prices down in the market. Why do you think Walmart dominates the market? Low prices. The same would happen with health care with hundreds of millions making similar choices for health costs. There is nothing sacred about healthcare; it is the same as any other consumer good. If you think this is crazy, just imagine that we could wave a magic wand and overnight NO ONE had any insurance. It was all gone. What would happen? Well since doctors would have basically zero patients at their old price, the price would plummet for services across the country in a matter of days/weeks. But doctors would not be losing money, as they would save tremendous amounts not having to deal with insurance carriers (and government regulators if we waive those away too). The manpower they devote solely to filing claims and managing claims would disappear.

And if you question the legitimacy of my claim that government interference in the market is the primary reason our health care system is  a mess cost-wise, then ask yourself this. Name three things whose price everyone agrees are or have been totally out of control and vastly exceeding the rate of inflation. (1) Real estate, (2) higher education and (3) healthcare. What do they all have in common? Heavy government involvement in trying to provide this “right” to all. Examples: (1) Real estate: Community Reinvestment Act, the Fed manipulation of the interest rate, big bank cronyism through “too big too fail” polices. (2) Higher education: massive subsidization of tuition costs through grants and government backed loans… or close to home, the HOPE scholarship has made education available to everyone in the state, but that has driven up tuition costs at state schools and made it much harder to actually go to college, not because of cost, but simply because of lack of space. Reagan was right on at least one thing “Government is the problem.”

*** http://mises.org/daily/5066/The-Myth-of-FreeMarket-Healthcare (an excellent read as well)